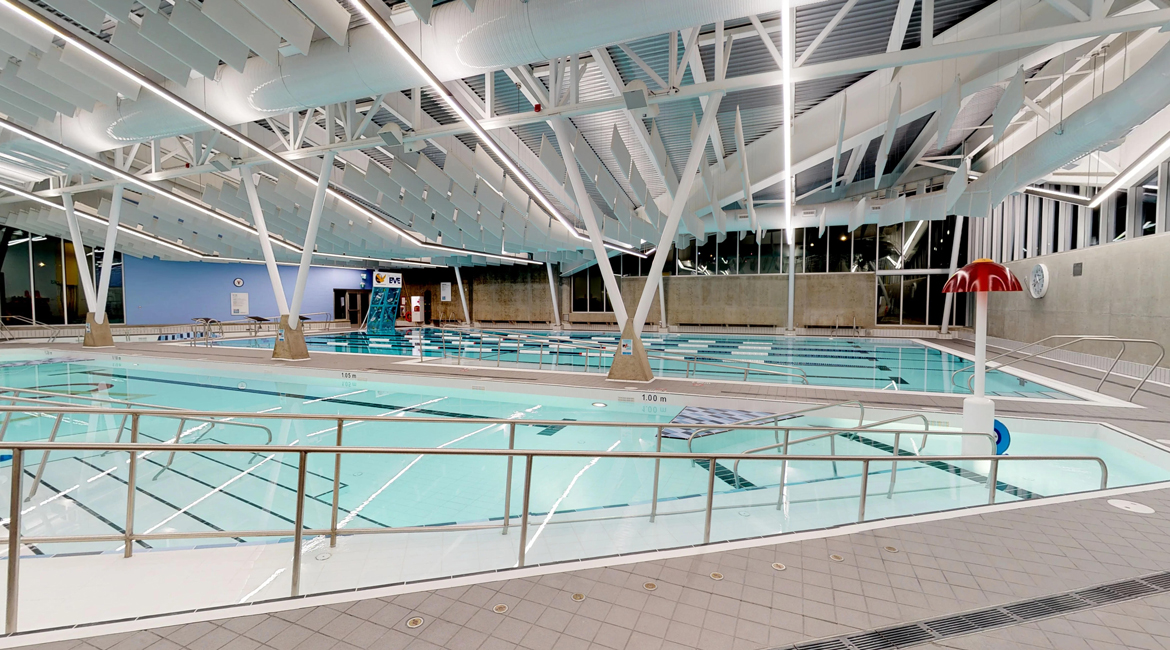 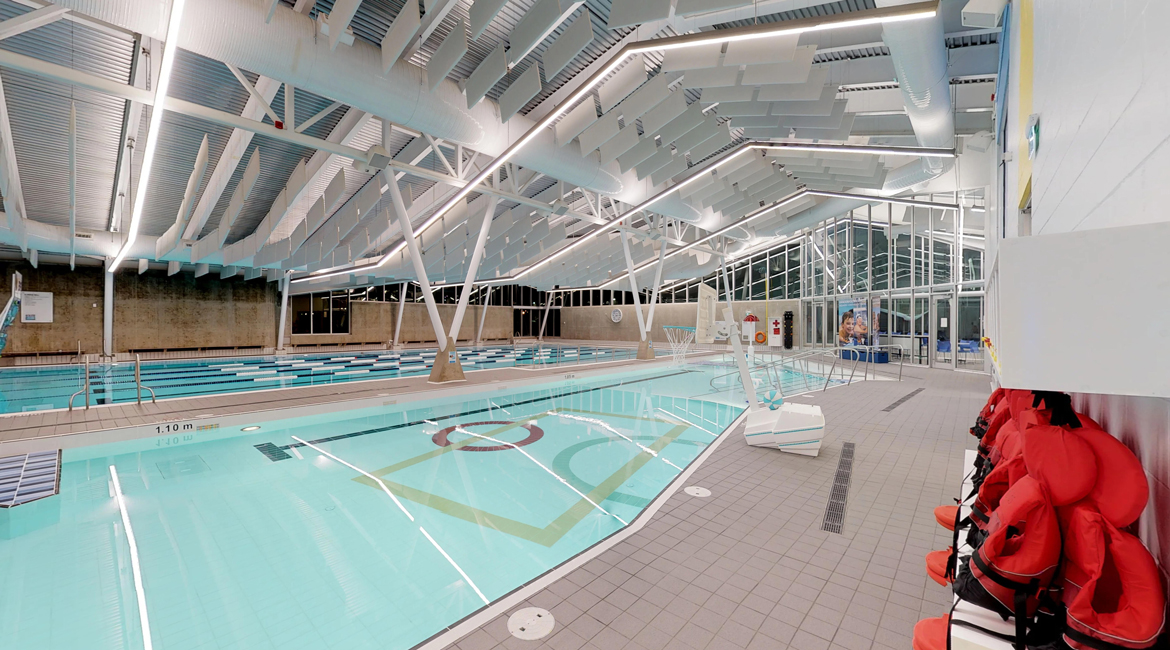 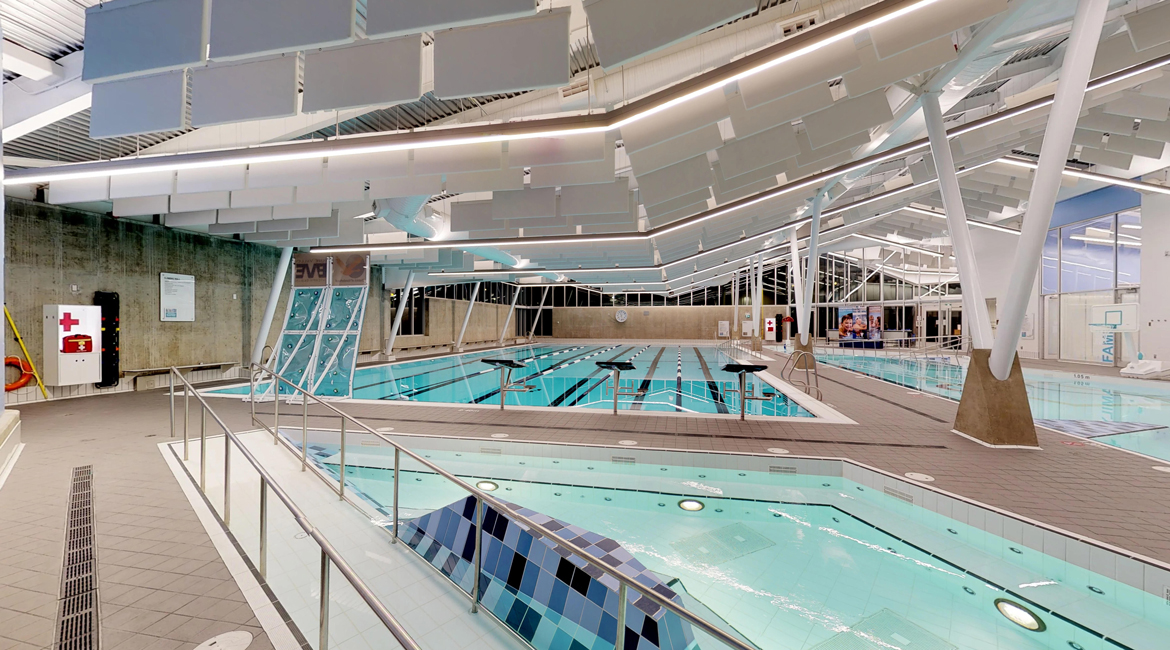 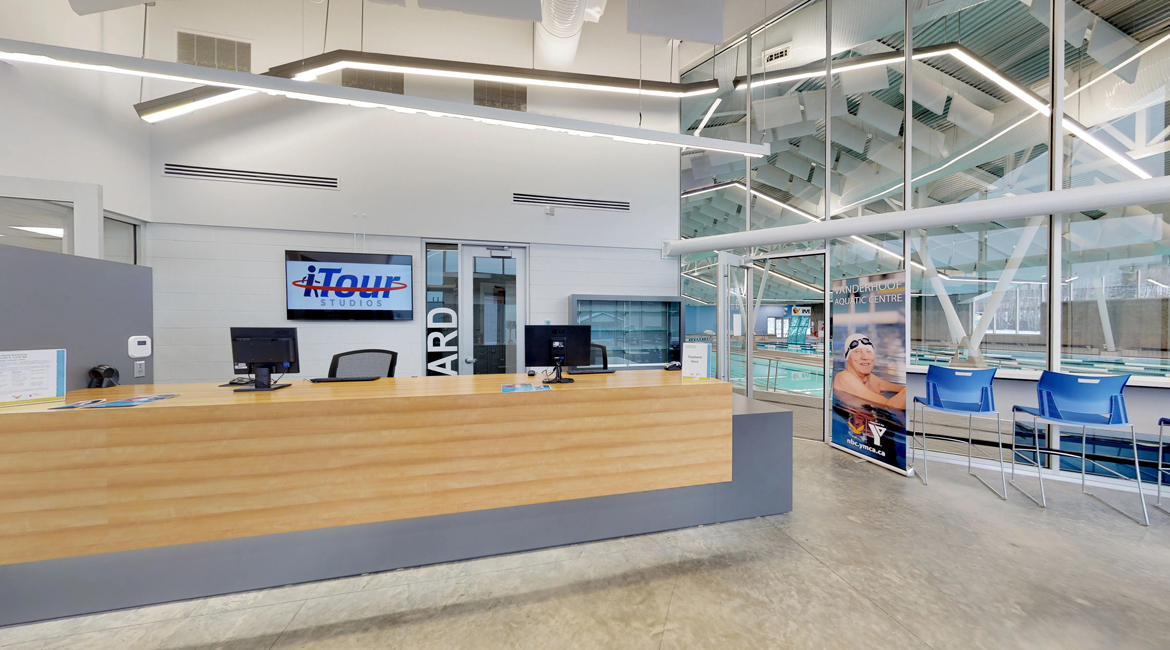 The town of Vanderhoof, in British Columbia, has built the Vanderhoof Aquatic Centre, which is a stunning new aquatic facility. The facility has a twenty-five meter, six-lane lap pool, a 1500 sq.ft. leisure pool, thirty-five-person hot tub, sauna, and an aquatic climbing wall. The natatorium space is an architectural showpiece, with a unique lighting design that creatively illuminates and integrates with the facility’s design.

Carscadden Stokes McDonald Architects Inc., the project architects, had originally envisioned an expansive wooden ceiling with embedded linear lighting that would accentuate the dramatic ceiling angles. As a part of the design and construction process, the original ceiling was stripped back, opening the ceiling and exposing pipes, beams, and other mechanical infrastructure. The project’s lighting designer, Doug McMillian of AES Engineering, recommended an alternative lighting design that would enhance the space by replicating the ceiling’s original angles and structure. In his design, the linear lighting, mounted in the same angles and plane as the former ceiling, was suspended across, effectively recreating the original plane and angles, and pulling viewers’ eyes away from the exposed beams. The lighting essentially “became” the ceiling.

McMillan’s approach of installing luminaires directly above the pools is still relatively new for the industry. A past concern has been maintenance accessibility to older lighting technologies. This option has been cost-prohibitive, as the requirement to drain pools and install scaffolding in order to change less reliable metal halide lamps had been too costly.

Typically, natatoriums utilize indirect lighting. Luminaires are installed on the sides of the space and directed upwards to bounce off the ceiling. Because there is no ceiling in the Vanderhoof facility, illuminating the space this way would have resulted in low efficiency levels. Uneven lighting, hotspots and achieving appropriate lighting in the center of the pool could also prove problematic.

A-Light’s high-performing, low-maintenance LED luminaires changed the game for McMillan.  Collaborating with A-Light led to a lighting scheme that is as dramatic in its aesthetics as the technology behind it.

McMillan selected A-Light’s Accolade D2 luminaire to suspend in rows above the pools, just below the ceiling’s mechanical infrastructure. The 3.5” wide and 5.3” high linear LED fixture was well-suited to the project. The fixtures performed well in the severe natatorium environment and provided the opportunity to propose a striking design with direct above-pool lighting.

Accolade D2’s indirect optic diffuses soft light to illuminate the ceiling above. Additionally, A-Light’s HE Tech™ lens technology uses a combination of optical diffusion and high-performance reflector design to deliver a broad distribution of direct light to the space below. Its ability to span long distances opened up interesting design possibilities for the aquatic center.

Following the angles of the ceiling required custom corners along the linear run. To achieve these transitions in a traditional natatorium rated linear fixture, separate linear luminaires would have to meet at each corner, breaking the continuous line of light at the connections. McMillan did not want these dark spots, as he envisioned a seamless look that would truly accentuate the ceiling’s unique shape.

He explained the design challenge: “Your attention is drawn to the dark spots rather than the overall lighting effect. Instead of the fixture complementing the architecture, it actually disrupts it”.

This posed an unusual challenge for the team at A-Light. The Accolade D2 luminaire is available with a natatorium option, which includes appropriate sealing and powder coating to withstand the harsh chemicals of the natatorium environment. However, because of the natatorium requirements, breaks would be required at each mounting point along the run to protect the lens and maintain the integrity of the fixture.

A-Light’s Design Assist team worked through the alternatives, customizing Accolade D2 to McMillan’s specifications. Utilizing custom-milled mid-blocks, the team was able to isolate the top optical chambers at the joints which would be sealed, enabling them to provide dedicated mounting points, and maintain a continuous lens on the direct portion of the luminaire.

“This customization was huge for me,” said McMillan. “The fact that A-Light was able to do the angles like that, with the continuous lens, is incredible in a natatorium environment. I don’t know any other manufacturer doing that right now.”

The final result creates a soothing, well-lit environment for the center’s visitors. Natatorium lighting from lower ceilings tends to generate unwanted reflections and glare off the water.  In this case however, A-Light’s customized Accolade D2 linear luminaires provide a much softer light and the total effect across the ceiling span creates an even distribution of illumination. No matter where you swim or play in the facility, the light level is the same.

“I work for the architect, and my job is to accentuate and complement their vision. This lighting design has enabled me to do that with tremendous results,” said McMillan.