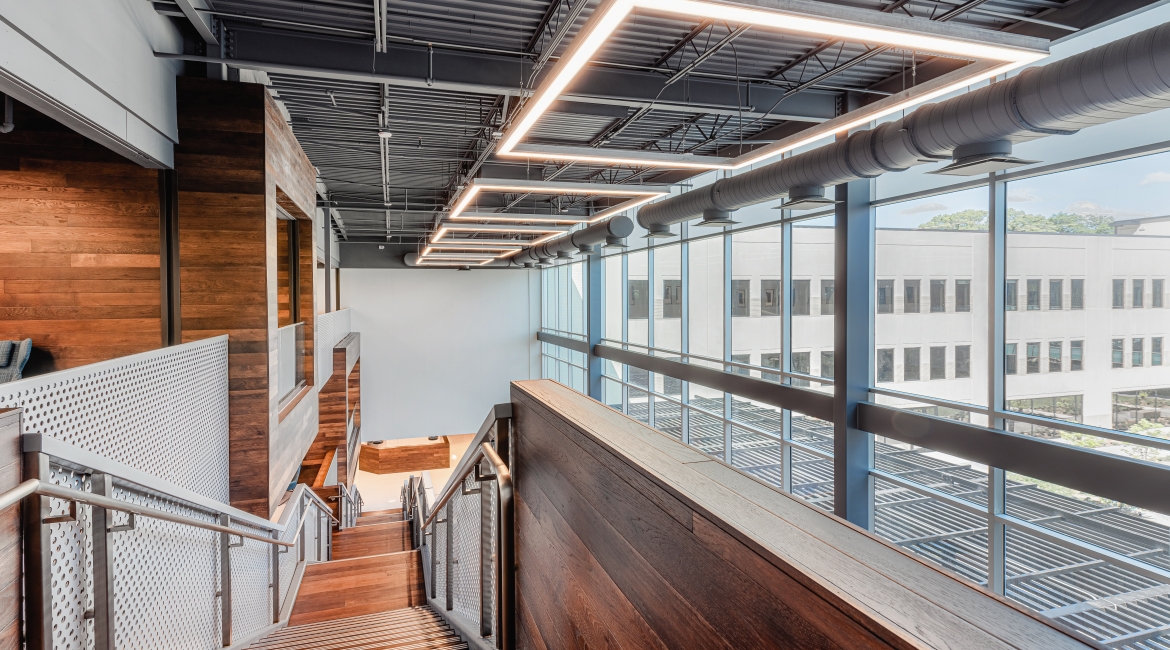 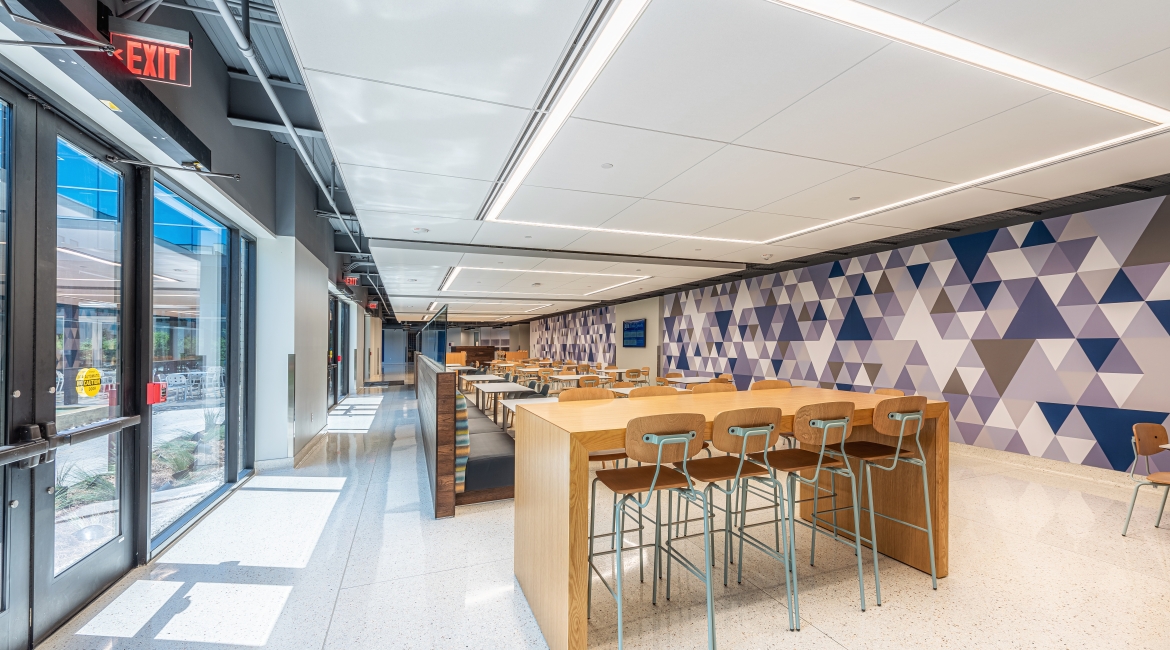 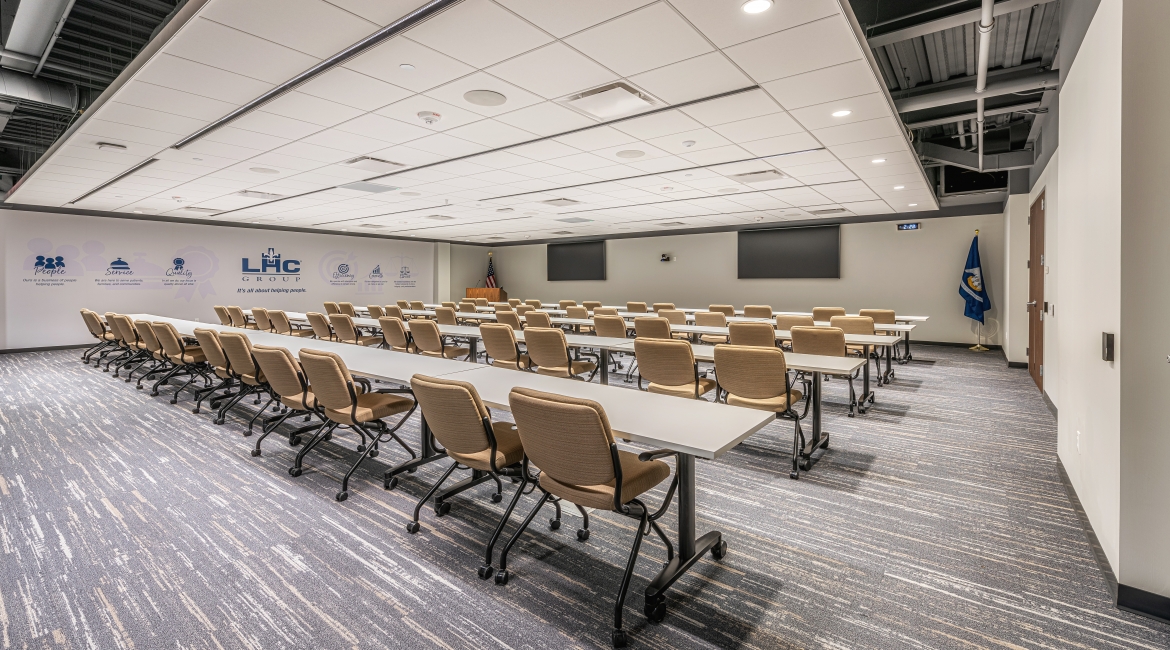 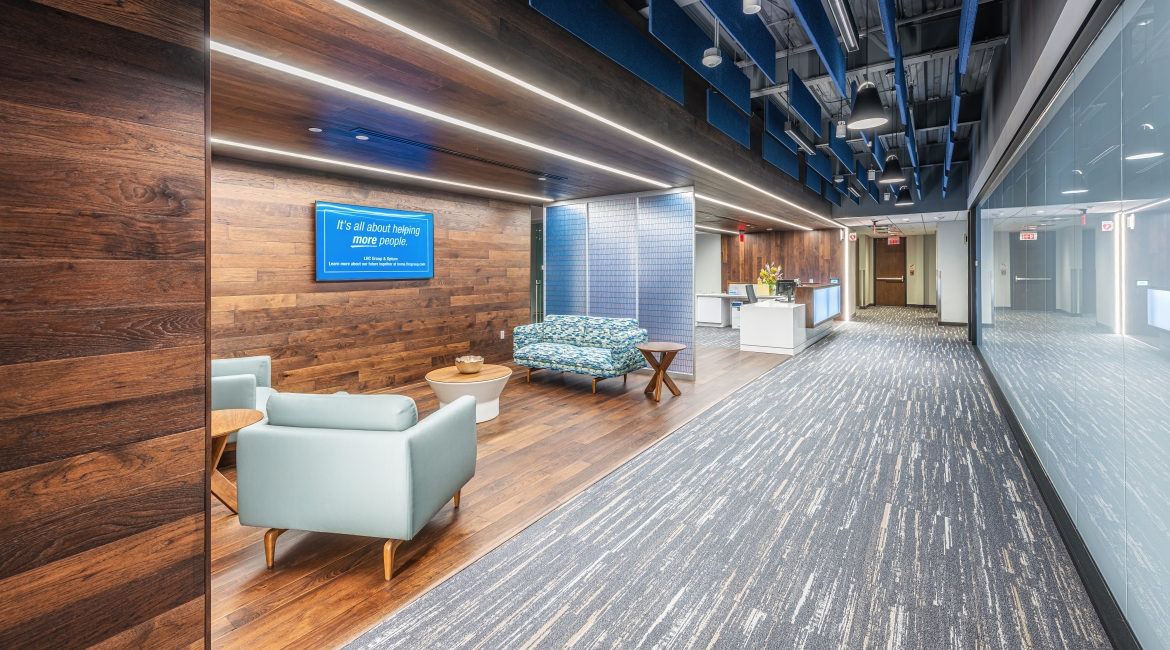 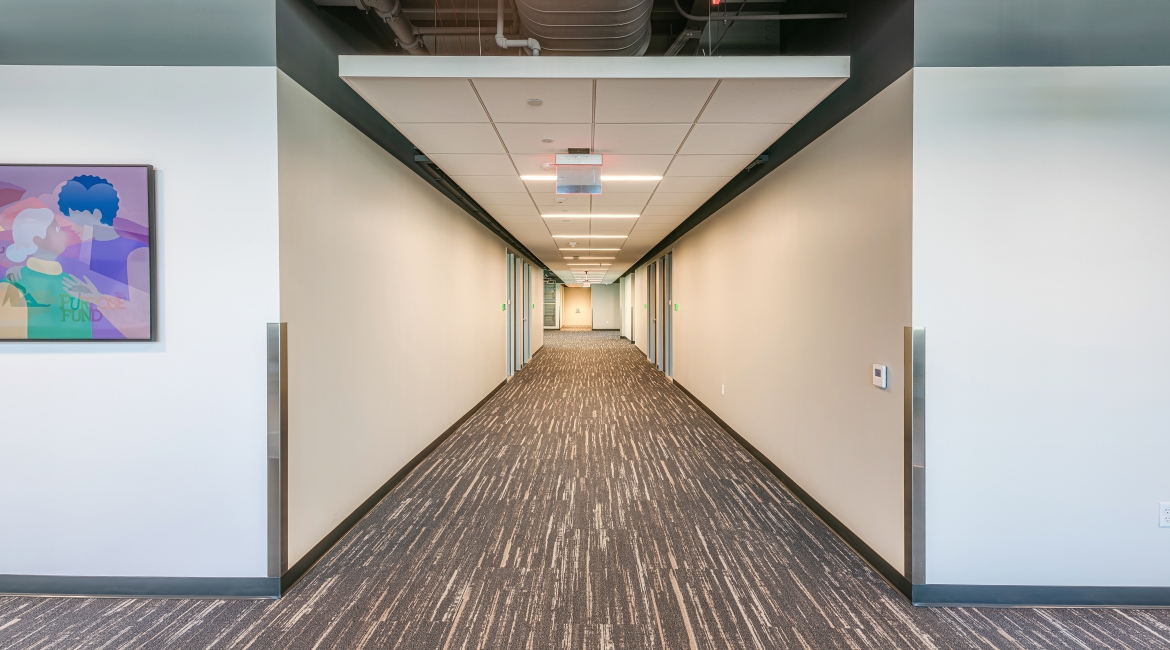 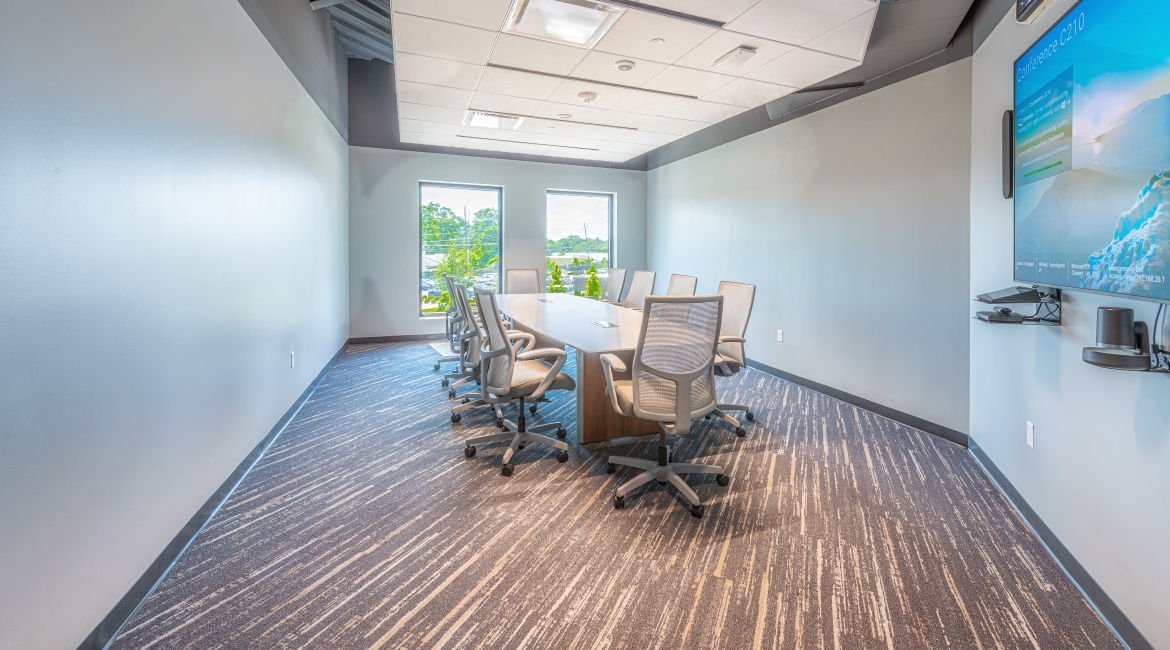 Lafayette-based LHC Group is the largest home health care company in the US. The rapidly expanding company had long outgrown its 66,000 sq. ft. main headquarters, with an additional five or six locations scattered around the city. So, it approached the team at Chase Marshall Architects to design a consolidated campus for its growing team. The rejuvenated facility would ultimately improve overall efficiency while helping to attract and retain new employees.

The 200,000 sq.ft. addition includes office spaces, conference centers, training facilities, a cafeteria, and a pharmacy. But because this facility is an extension of the original building, architects were constrained by floor heights in many facets of the project. This created some unique challenges for lighting. A-Light architectural luminaires feature prominently.

One of the more striking rooms is the employee dining space. With a floating ceiling height of only 12'9", the goal was to make the room look and feel as tall as possible. Designers did not want to crowd the room with multiple light fixtures suspended from the ceiling or affixed to the wall. A-Light D5 recessed linear luminaires in custom rectangles provide a clean accent in the space.

"We were looking for a light fixture to make a statement in the cloud ceiling," said John L. "Jay" Chase, Jr., principal at Chase Marshall and managing principal, project architect, and project manager for the massive undertaking. "I love the big boxes of light and the quality of illumination they produce in the space."

Custom D5 recessed rectangles had also been selected for the three-story atrium and stairwell. They, too, would have been similarly inserted into a cloud ceiling. However, as construction progressed, it was discovered that this dropped ceiling conflicted with one of the safety systems. Chase troubleshooted with the A-Light team to find a plan B. With the addition of mounting brackets, they were able to retrofit the recessed luminaires to create dramatic pendants suspended along the industrial ceiling.

“A-Light was so helpful and accommodating in finding a solution,” said Chase. “The pendants really look super cool, and the owner absolutely loves them.”

D5 recessed fixtures are also used in office corridors throughout the building. The minimalist lines of light are a subtle wayfinding cue as employees move through the building.

LHC Group's executive floor is elegance itself, with rich wood paneling and stylish amenities. A-Light's D5 recessed luminaires figure prominently, providing sleek lines of light in the dropped wood ceiling over reception. In addition to providing illumination to the waiting area, they also serve to define the executive space.

An adjacent corridor with high industrial ceilings required a different approach to lighting. Acoustic panels for sound absorption are interspersed with pendant lights that are consistent with the lighting design in other areas of the facility. However, the space did not benefit from overflow light from neighboring offices, as on other floors, resulting in a darker atmosphere.

"What I love about Apex 3 is that it blends seamlessly," Chase said. "The fixture is the same color as the ceiling, and the light source is so discreet that you can't determine where it's coming from. On a typical day, you don't see or notice them, which is exactly what I wanted."

A-Light’s Apex luminaire also provides the primary illumination for the new high-tech training room. The space is equipped with state-of-the-art cameras and audio equipment to enable presentations to be broadcast to every computer in the LHC network. But with an acoustical ceiling of only 9 feet, it was clear that anything suspended would interfere with the AV. Minimizing glare was also a concern, as employees and guests in the room are often interacting with laptops and tablets.

Chase opted to use A-Light’s Apex 5 recessed luminaire. As with the Apex 3, its LED technology features a compact optical system to carefully control and channel the light source.

“Our client was absolutely amazed by these fixtures,” said Chase. “They're minimalistic, and they perform well. Most people walk into the training room and cannot figure out where the light comes from!"

The client was so pleased with the luminaires that the lighting specifications were modified for the boardrooms and 'huddle rooms' to include Apex 5 recessed fixtures in the dropped ceilings.

All lighting is on daylight sensors and managed with an nLight AIR® lighting controls system from Acuity Brands Lighting and Controls. This gives the LHC employees complete control of their lighting environments throughout the day.

“Lighting was an early priority in the project,” Chase said. “From the training room to the boardrooms to the dining area, A-Light has helped us to create a stunning workplace. LHC now has a headquarters that not only contributes to corporate efficiency but offers an extremely positive employee experience.”