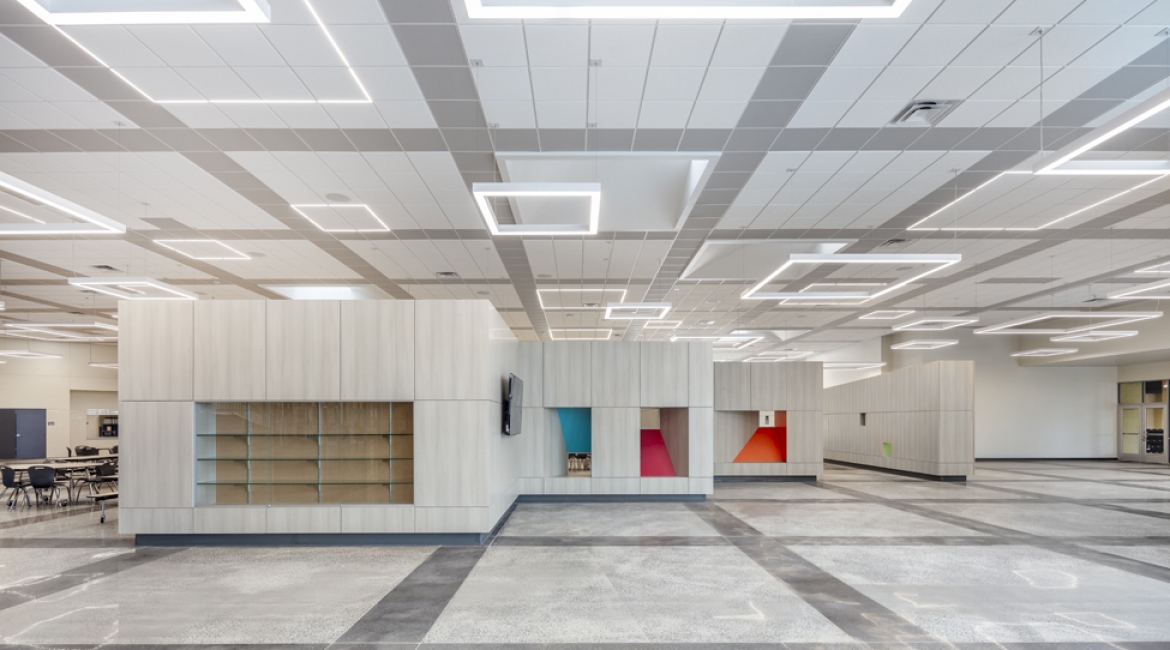 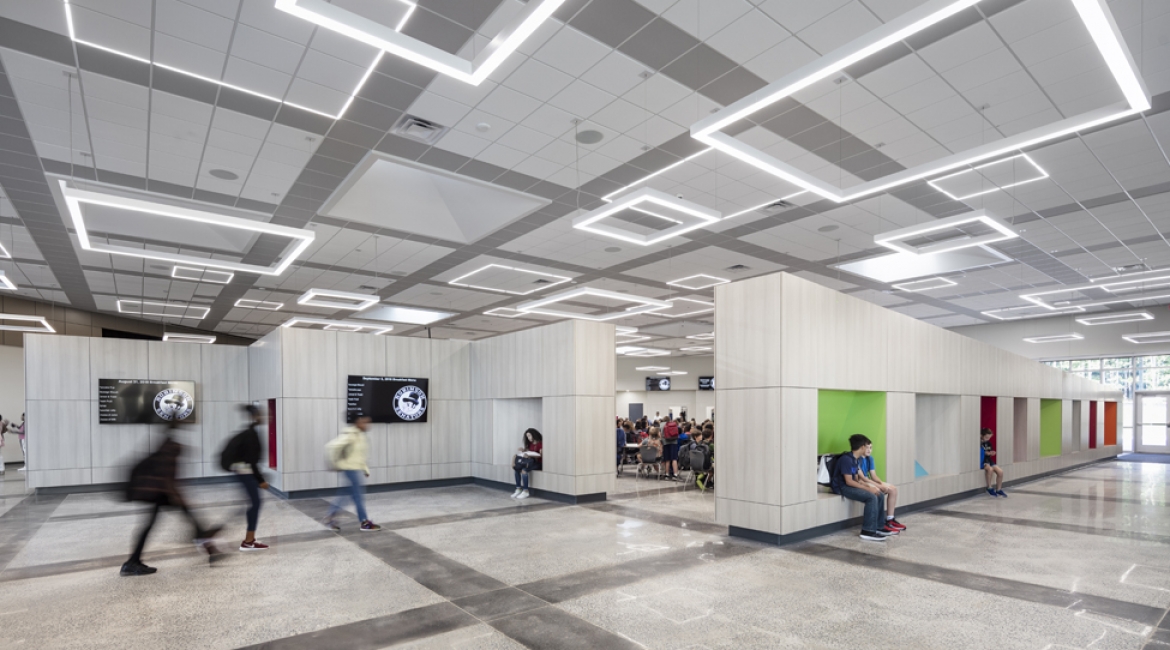 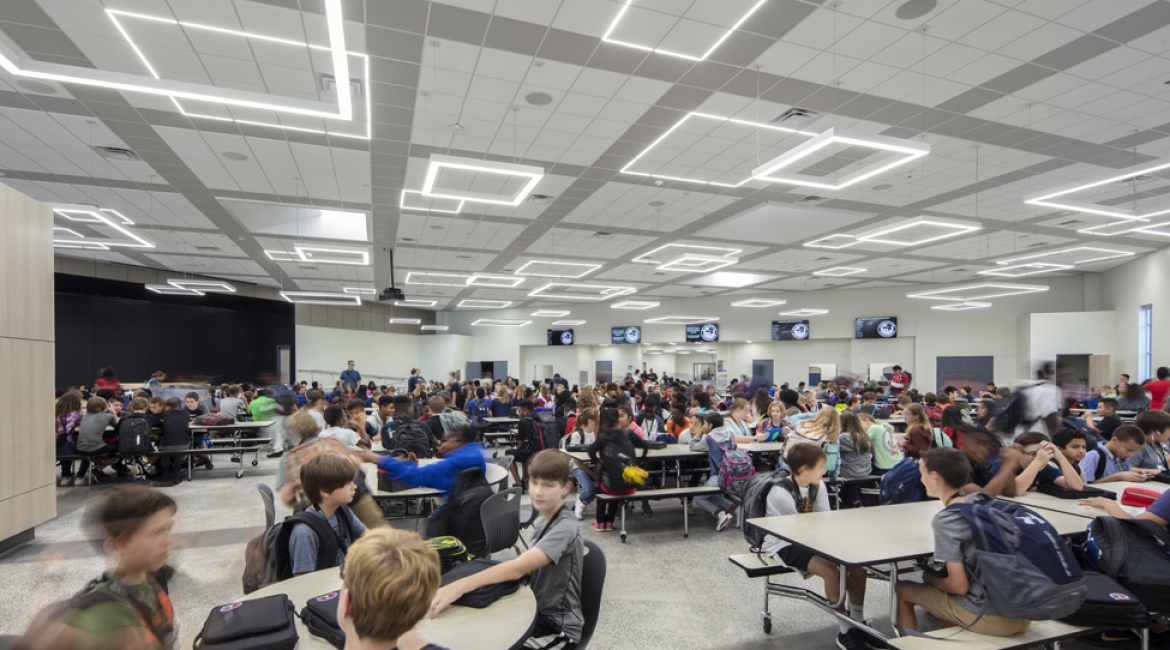 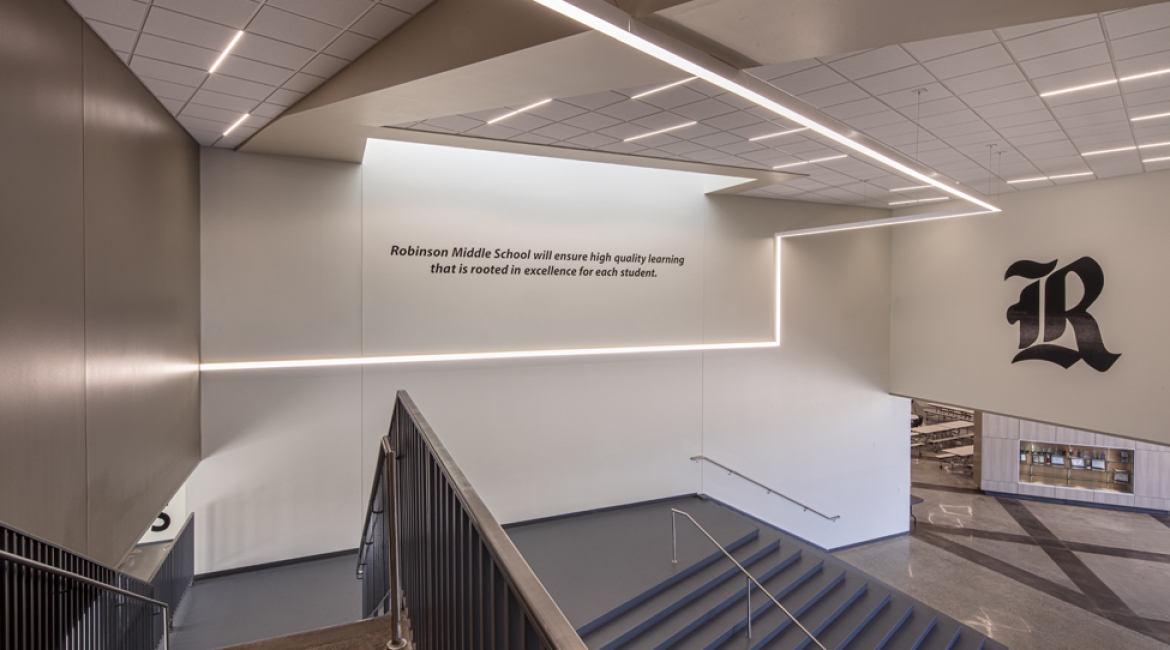 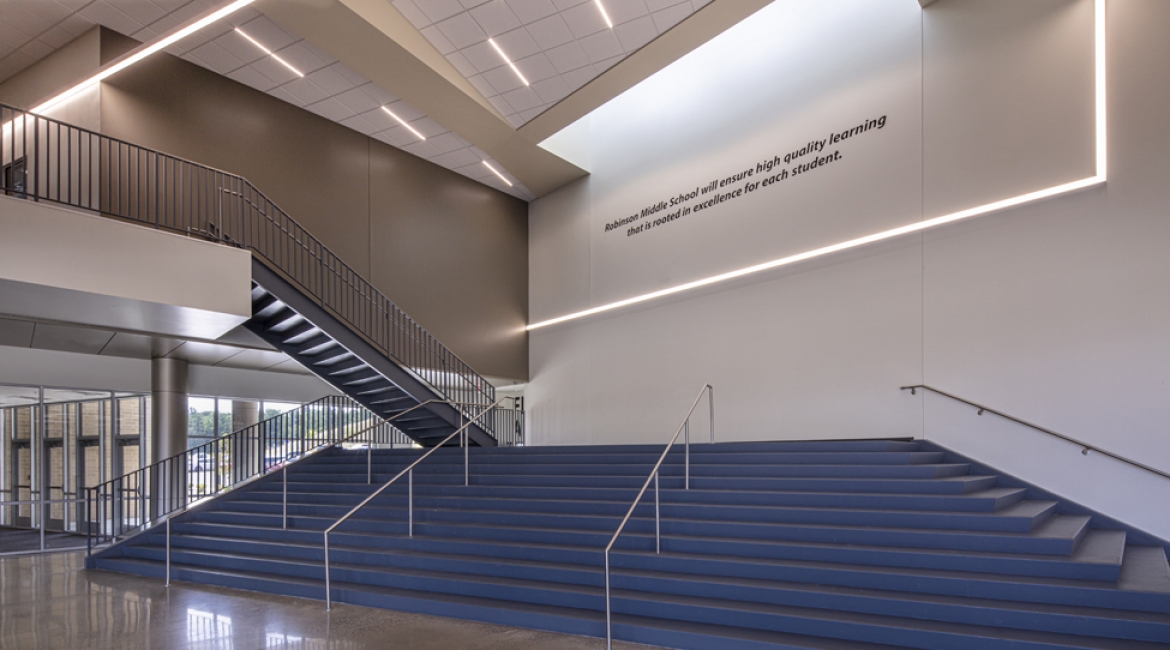 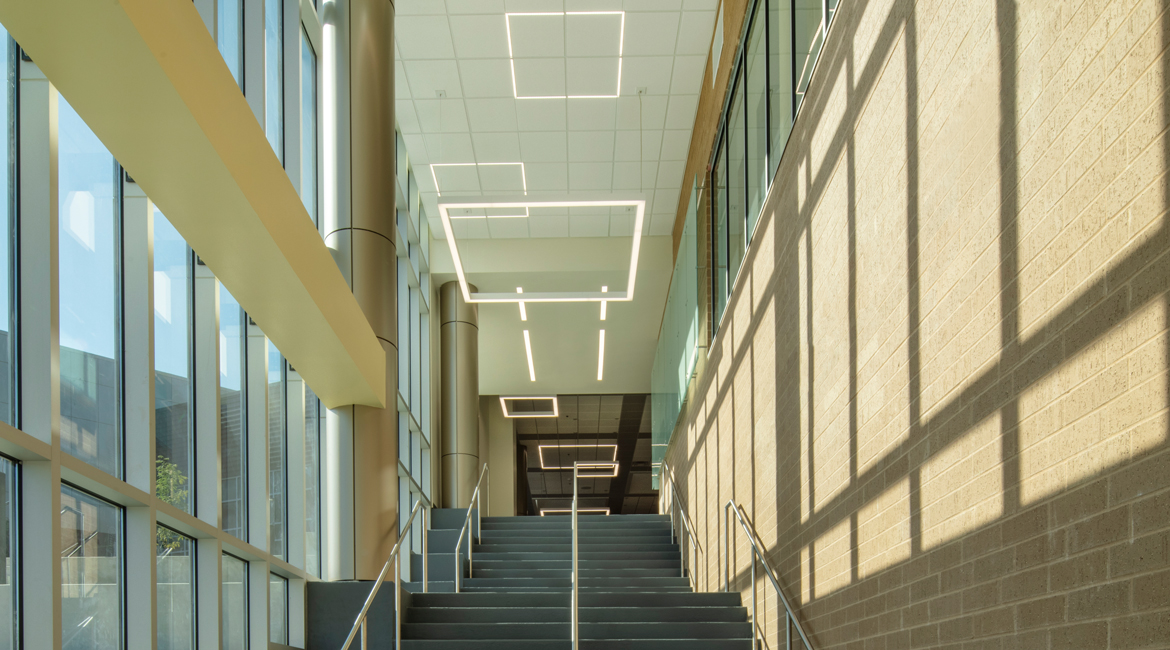 When the Pulaski County Special School District constructed its new middle school in Little Rock, Arkansas, its goal was to attract and retain students in the region. With a focus on innovation and safety, they created the state-of-the-art Joe T. Robinson Middle School.

The 145,000 sq.ft. facility hosts classrooms, administrative offices, gym, dining, and common areas that cater to a population of 800 students. With three stories, the grade six, seven, and eight pupils each have a dedicated floor of learning.

This is a fresh face for the campus, moving from a much older building. And significant improvements have been made concerning the student learning environment, including overall safety and security.

Project designers looked to bring playfulness and movement to the school common areas, so they brought in A-Light to create custom-patterned lighting schemes.

Staff and students entering the campus are greeted with suspended geometric patterns of light created by A-Light’s Accolade D3 and Accolade D5 linear fixtures. The suspended D3 and recessed D5 luminaires form large, open rectangles up a broad staircase which is flanked by exterior windows along one wall. It creates a striking visual effect as visitors approach the building and provides direct illumination down to the stairs for safe passage in the evening hours.

The geometric theme continues through the expansive lobby as D3’s clean lines form an eye-catching pattern of suspended squares along the ceiling. D3’s high-performance LEDs effectively disperse the light down and across the floor below, so students pass through a safe, well-lit space as they move between classes and other activities.

Russell Fason, principal at WER Architects/Planners, and his design team, had specific goals for the expansive cafetorium, a cafeteria that doubles as an auditorium for assemblies.

“We were looking for a way to add interest to the large expanse of ceiling and A-Light’s products enabled us to create a one-of-a-kind-effect in the large open space,” said Fason.

With the assistance of the A-Light Design Assist team, they were able to transform the space into the school’s signature room. A pattern of suspended D3 and recessed D5 linear luminaires, also in squares, is interspersed across the cafetorium ceiling. By playing with depth and ceiling height, they were able to create an interesting visual and texture for the ceiling.

The graphical statement is quite compelling. But the versatile luminaires also combine to provide ambient light that is bright yet comfortable for students to eat lunch, finish homework or participate in a school assembly.

One of the most intriguing lighting design challenges for the project was the central staircase in the lobby. The design intent was to create a custom pattern fixture integrating multiple angles (as much as 110° in some cases), and multiple mounting options, into one luminaire. The installation would start as wall-mounted, then transition to suspended mount, and finally to surface mount with the light distribution changing direction.

A-Light’s Design Assist team took on the challenge, working with the D3 to create this unique fixture. It successfully achieved the design objective and effectively lit the angled corner of the upper staircase with a line of continuous light. The powerful light engine and HE Tech™ lens provide a wide, uniform distribution of direct illumination along the stairs. Additional D5 linear fixtures are recessed in the upper ceiling to complement the one-of-a-kind luminaire and add additional downlight to the floor below.

“The lighting has brought a unique look to the school, and helped to unify the open public spaces,” said Fason.

Pulaski County Special School District is working to certify the facility for LEED Building Design & Construction – New Construction v3 2009.  Lighting efficiency will be on the checklist, and long-lasting LEDs in both the D3 and D5 luminaires will positively contribute to the campus’ energy savings goals over the long term.

With a renewed sense of school spirit and pride, Robinson Middle School students are experiencing twenty-first century learning enhanced by a stimulating environment of eye-catching lighting and design.

“Everyone, including the client and students, loves the results,” Fason said. “In fact, we get comments and compliments on the lighting more than any other feature!”